Starwind have very kindly provided me with an NFR licence so that I can try test our, and blog about their cloud VTL product. Announced at VeeamOn, the StarWind cloud VTL product is a Virtual Tape library that can be added to a server, over iSCSI and will present a virtual tape library to the server.
Starwind also have the ability to connect the cloud VTL to an Amazon S3 bucket which makes for a nice way to archive the data offsite.
Downloading the exe was straight forward enough, fill out a short form and it’s down. Weighing in at just over 72MB, it’s a quick download.
Copying it over to a test Windows 2012 R2 server I’ve spun up in the lab for the process and the first thing I see is:

So I downloaded a copy Microsoft .Net Core and installed that, attempt two to install the cloud VTL and…

After a bit of digging I found out that the Starwind cloud VTL needs a newer version of the C++ redist than I had installed.
That’s largely my fault as the install image I use has some applications already installed to it for easier monitoring of the services on the VM and some of the dependancies clearly need updating!
Longer term, I’ll be these installed applications with chocolatey packages where I can to ensure that they are always up to date rather than having to remove and update software in the main image.
Once the C++ redist had been uninstalled and the latest installed the cloud VTL installed with no issues at all.
The installer is nicely configured as it has all of starwinds products in one installer.

Selecting the cloud VTL shows all the options for the VTL application and it’s nice to see Powershell in the list of options. 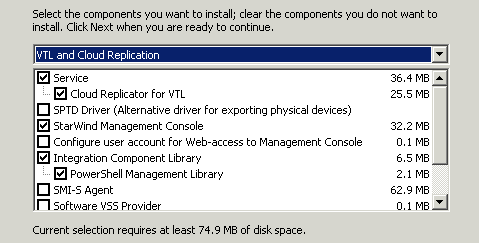 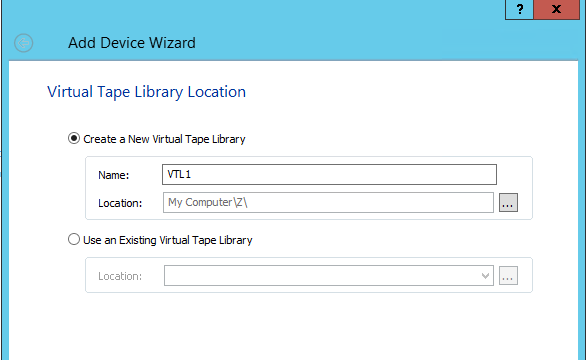 Adding in the VTL is straight forward process as it’s just a matter of clicking on “Add VTL” and providing a location for the virtual tapes. 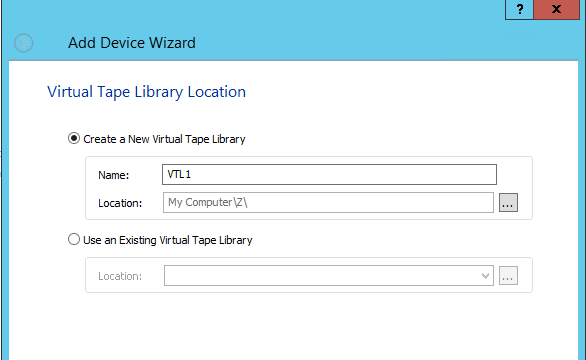 I’ve chosen the Z: drive of the Starwind VM is on slower bulk storage, the perfect place to put the virtual tapes as it doesn’t need to be particularly fast. It’ll still be faster than most tape libraries though which is certainly a bonus.
After selecting the location, there is an option to select which tape library the VTL Will emulate, the only choice here is the HP MSL8096.
Once everything was setup, I created an ISCSI connection from my Veeam server to starwind over iSCSI. At first I couldn’t get veeam to see the tape library but I realised that this was because I was telling it to scan the starwind server for the tape device, when I told it to scan the local server, suddenly I had tapes!
The next issue I hit was that even though I could see tapes, I couldn’t see drives. Off to the HP website to download the tape drivers:

Well, that’s a blow, however, if I hit “extract” then pick a folder to pop the files in to and then run setup I hit no problems at all!

Drivers all installed I now had tapes and tape drives happily visible to Veeam.

As part of another project, I’ve got a UAT VM setup that is being used to test out some wiki software so I thought that would make a great test for a tape job backup job along with a couple of other VM’s used for Docker and OpenFire.
In Veeam, I set up a couple tape pool for UAT tapes and then I setup a backup job with just the staging wiki vm selected and used the VTL as the secondary target and then kicked off the backup.
One nice feature of the Starwind product set is that it has it’s own performance monitoring built in so it’s quite easy to see the impact that the VTL backups have on the environment:

The final aspect I wanted to have a look at is the cloud replication option, this allows for virtual tapes to be uploaded to AWS by using the AWS access key and secret key and naming an S3 bucket. 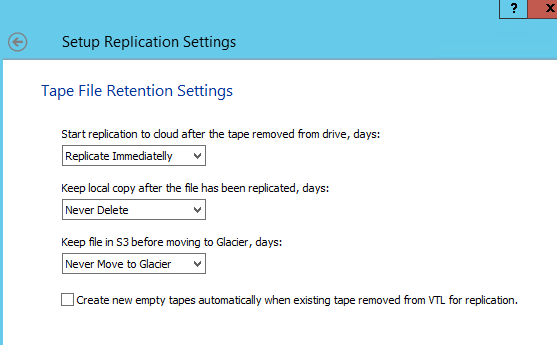 There are a couple of nice features with this, not least the ability to push a policy from the software to the AWS bucket to migrate the data from S3 to Glacier. If you’re not familiar with AWS, Glacier is designed for cheap, long term retention. Restores from glacier are much slower than from S3 as it’s not online storage.

In the VTL, the tape will only upload to S3 when it has been moved from the online shelf to the offline shelf:

The VTL will even create a new tape to replace the uploaded one which is quite neat and using the VTL like this certainly saves all the hassle of having to sort out purchase orders for new tapes!

Overall, the Starwind cloud VTL is quite a nice piece of software, it’s a great replacement for physical tape libraries and it’s certainly a lot smaller, a lot more efficient and more cost efficient over having to run a tape library, buy tapes and so on. The ability to upload the tapes to S3 is a nice way of ensuring the data is secured offsite without having to do it manually.

Before I start, I want to draw your attention to a good friend and marketer, Laura Lilienthal, with whom I've had an interesting discussion about the word disruption. You can read my take

More and more these days I'm seeing IT folk feeling pressured to work longer and longer hours to fix problems when an outage hits or when a project is late. This sort of